Sell your products on Fnac, gain access to various marketplaces and reach millions of international customers. This while maintaining ease and overview through the ProductFlow platform.

Sell all over the world through Fnac

Anyone who ever visits Belgium or France has probably seen or visited a Fnac store. Fnac has no stores in the Netherlands, but you can see them everywhere in France and Belgium.

For those who don't know it yet: Fnac is a huge, globally active retail company that started in France in 1954. It consists of both stores and online marketplaces, so you can also buy and sell online through Fnac.

Characteristic of the Fnac stores is the enormous retail space and the wide range on offer. You can spend many hours browsing there. They sell books, CDs, DVDs, games, toys, smartphones, home electronics and much more.

Fnac has stores all over the world. The closest to the Netherlands you will find Fnac stores in Belgium, which are partly Dutch speaking. Besides the 12 stores in our southern neighbors and 215 in France, Fnac has stores in Europe in countries such as Switzerland, Spain and Portugal. Outside Europe there are Fnac stores in Ivory Coast, Cameroon, Tunisia, Qatar and Taiwan, among others.

The history of Fnac

Fnac once started with one store, but has now grown into a huge company with about 25,000 employees. The company started in 1954 out of idealism: even without a shop, people sold items with high discounts directly to people with a small purse. In 1957 the first store opened on the Boulevard de Sébastopol in Paris and after that it went fast. The first store opened in Belgium in 1981 and Fnac now has stores in 15 countries worldwide. After the growth of the stores, the next step was online growth. After that, Fnac was still not done growing: in 2016 the Darty group was taken over and thus a mega-sized company was created.

From Fnac and Darty to Fnac Darty

For years, Fnac and Darty were each other's biggest competitors. Like Fnac, Darty started in the 1950s. In 1957 to be precise, Darty started selling household appliances in France. The company continued to grow, among other things by expanding with electronics and later also telecom. In 2016, Darty launched his own marketplace, www.darty.com.
The year 2016 was an important year in the history of both companies: Fnac took over Darty. Since the acquisition, both companies have come under the parent company Fnac Darty.

Online, Fnac was there fairly early. In 1999 the Fnac webshop opened. In 2009 the first Fnac Marketplace was launched: initially only for French customers, but now active worldwide. The Fnac Marketplace quickly reached the e-commerce top 10 in France. Due to the merger with Darty, Fnac is now the second largest marketplace in France.

In 2020, Fnac Darty achieved a turnover of no less than 7.49 billion euros. An increase of 0.6 percent from the year before, while 2020 was a difficult year for most companies. Online sales make up just under 30% of Fnac Darty's total turnover.

Fnac Darty has about 25,000 employees. Fnac and Darty together have 908 stores, 741 of which are in France. The reach online is enormous: Fnac and Darty have about 44 million cumulative visits per month in France alone on the websites fnac.com and darty.com.

ProductFlow makes it easy for you to start selling via the Fnac Marketplace. To get started, create an account and discover the speed and ease of use of ProductFlow. Do you want to sell in multiple countries? Easily manage and link your products and associated content to platforms such as Fnac? Then quickly schedule a free, no-obligation demo.

From Fnac and Darty to Fnac Darty

Are you thinking about selling your products on Fnac, but would you first like to know what the benefits are? Below we list the advantages for you:

The reach of Fnac

Fnac's reach is huge. Your products come to the attention of tens of millions of potential customers. In France alone, Fnac now reaches about 36 million customers, more than half of the population.

In addition to the enormous reach of Fnac itself, you also have access to the other marketplaces of the Fnac Darty group, such as darty.com.

Fnac helps you on your way, with a Marketplace team that guides you without obligation and at no extra cost.

At Fnac you pay a monthly subscription fee of € 39.95. Fnac does not charge any additional costs for support and promotion. Fnac charges a commission of 6.5% to 16% of the sales price on your sold products. The exact amount of the commission depends on the product category and whether your product is new, refurbished or second-hand.

No entrepreneur is waiting for long-term contracts with difficult or unclear conditions. They understand that very well at Fnac. The conditions are clear and you can cancel at any time. This way you remain unfettered and flexible. Handy if you sell seasonal items, for example.

Fnac offers extra possibilities to promote your products, without extra costs. This can be done by means of newsletters, banners, special group pages and much more.

Selling via Fnac: this is how it works

Are you ready to start selling on Fnac? Then sign up immediately. This can be done in two ways:

• Register via the international site of Fnac. Here you will find the form to register. You can register in both English and French. Choose your preferred language at the top right of the screen.

• It is possible to register in Dutch via the Belgian branch of Fnac.

Before you register, think about which category your products fall under, and through which interface you want to upload your product descriptions, because these are questions that they ask when registering. Furthermore, the following things are good to know before you register:

You must have official status as an entrepreneur. Selling on Fnac is not available to individuals.

You are able to store, package and send your products to the end customer yourself.

You send invoices to end customers yourself. You must be able to submit an invoice in French

Provide overview and efficiency with ProductFlow 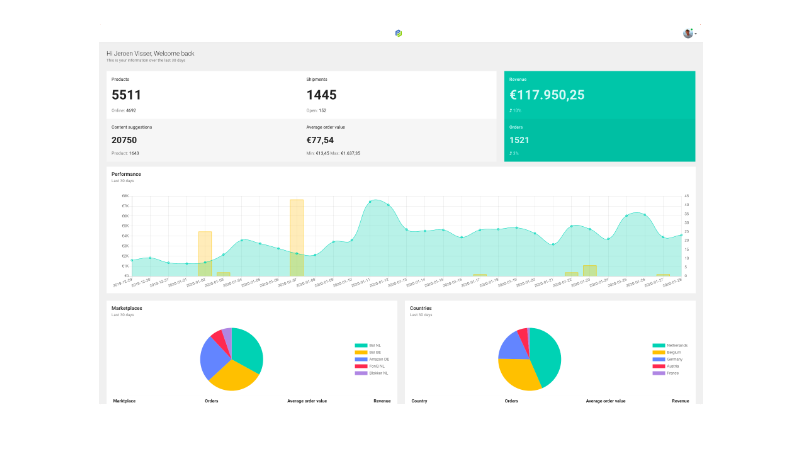